While everyone is away on holiday (it seems) this Easter weekend, we’re bound to our desk working like bananas so, for a lunchtime break, I thought I’d share with you one of my latest mini-obsessions: fashion policing the new FLOTPRC (First Lady of the People’s Republic of China), the glamorous Li Pengyuan, wife of China’s newly-appointed president, Xi Jinping.

After all, one of our more popular posts in the recent past was our FLOTUS fashion face-off between Michelle Obama and Ann Romney in the heat of last year’s US presidential elections (click here to view that post).

As China is close to our hearts (literally, we do live here after all) and as the world’s media – from the New York Times, the Wall Street Journal, Time magazine, Vogue China to the fashion pundits at our favourite China-watching blog, the Shanghaiist – have all been weighing in on Madame Li’s outfits this week as she accompanies her husband on a whirlwind official tour of Russia and Africa – we thought, heck Becks, we might as well join in the fun!

The new First Lady’s choice of a tailored dark coat accessorized by a turquoise scarf and tailored leather black handbag (looks like a Tod’s but apparently is not – China media saying that it is not a designer brand), upon arrival in Moscow, reportedly sparked copycats on Chinese online shopping portal Taobao. 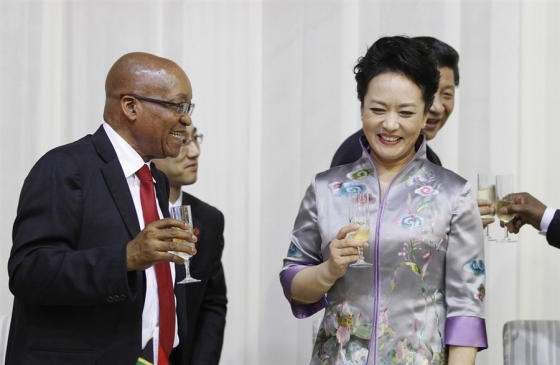 Another official arrival, another great, crisply tailored suit, this time with a flattering Mandarin high collar, with grey-green and light blue pattern. 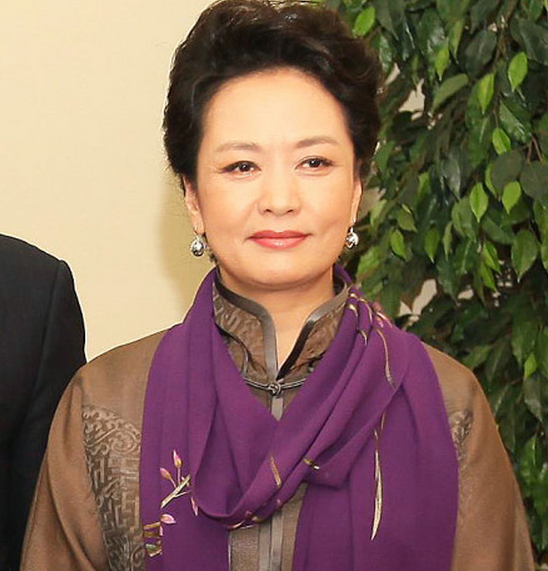 We love how the First Lady is proudly representing Chinese fashion! Here she wears a traditional silk embroidered Chinese jacket with high collar and Chinese buttons, fashionably draped with an embroidered scarf.

To those of you who might be somewhat clued out as to what’s hot and happening here in the good ol’ PRC, here’s a little backgrounder on the new First Lady and her grace, charm and sensible yet stylish wardrobe that’s been wowing diplomatic and fashion circles:

Before her debut on the world stage this past week, Madame Li gained fame in China on her own, as a much-beloved Chinese folk singer and opera star. Every year she was a fixture in the country’s annual Chinese New Year star-studded television extravaganza (the same one which saw Celine Dion singing – in Mandarin – most recently).  The First Lady has performed in Lincoln Center in New York and at the Vienna State Opera House in the past but since her husband became China’s vice president in 2007, Madame Li began scaling back her public singing appearances. In 2011, the World Health Organization appointed her as a goodwill ambassador for AIDS and tuberculosis. Madame Li and the President have one daughter, currently a student at Harvard.

As for the low-key designer – Ma Ke – who is behind Madame Li’s tastefully understated wardrobe – the Shanghaiist offers this interesting observation (post below from Shanghaiist):

In a society that typically has more money than class, it’s surprising that such a simple and understated designer as Ma Ke should be on everyone’s lips. If the name sounds unfamiliar rest assured she’s soon to be a household name. Ma is helping turn Peng Liyuan, China’s First Lady into China’s Jackie Oh.

Interestingly anti-consumerist and slightly ironic, she is the designer behind the brands Exception de Mixmind and Wuyong. Naming her haute couture brand Wuyong, which literally means “useless”, Ma says she wants to redefine modern luxury, drawing it away from “Western Materialism”, and towards more spiritual factors, as she believes that elements such as time, water and the human spirit are timeless [Shanghaiist Ed.: *eyeroll*].

What does that actually mean? Both brands only use sustainable production, including traditional dying, weaving and embroidery techniques invented by the Dong People of southern China. The fabrics used by Wuyong are actually woven with Chinese loom technology dating back to 19th century. Furthermore, rather than going the route of ultra-elite and ostentatious, as many domestic haute couture designers have, Wuyong’s fashion shows are outside, open to the public and use a collection of modern dancers and tai-chi performers instead of models.

This ecologically and socially sustainable approach seems to have worked, as Exception just celebrated it’s 16th birthday, and Wuyong was the second ever Chinese collection to show at Paris Fashion Week. Furthermore, Exception has generated sales over one billion yuan in 60 stores in China. While many have attributed the First Lady’s coat and bag to Exception de Mixmind, industry insiders have pointed out that they actually belong to Wuyong. The brand has reportedly made over 100 outfits exclusively for Peng in the past 3 months. She will continue wearing them throughout her trip to Russia, Tanzania, South Africa and the Republic of Congo.

The First Lady is supporting sustainable fashion in China???
Very fashion forward of her, if I may say so, and if then… KUDOS to the FLOTPRC!