The 411 on the KTT (Guangzhou-Hong Kong Express Train)

We mentioned in an earlier post that we would be doing a quickie run to Hong Kong yesterday.

Yes, I crossed and re-crossed the border in one day. At 8:30am yesterday, I was still at home in my jammies, having finished breakfast with Herr Hubby, washing the dishes, watering the plants on the balcony and checking Facebook. By 8:30pm yesterday, I was enconsced in my kitchen, preparing dinner and waiting for Herr Hubby to come home from work. Easy-peasy. So, you might ask, how did I get to Hong Kong and back home so fast? Here’s the lowdown on our quick get-away.

The first thing you need to know is that there are 2 types of trains to Hong Kong. One is Chinese-owned and operated and the other is owned and operated by Hong Kong’s MTR Corporation, who run the same model of efficiency, precision and cleanliness that is the Hong Kong subway system. The latter, for some reason, is known as the “KTT“.

On both types of trains, the journey to Hong Kong takes 2 hours. Also, ticket prices remain the same for both trains: RMB 187 (premium class coach, one-way; HKD 230 or approx. USD 30), RMB 154 (first class coach, one-way, HKD 154 or approx. USD 24). The terms used for coach classes is quite confusing – as first class can actually mean second class – so you’d better be clear when you’re purchasing tickets. The Chinese trains run more frequently; there is a train running practically every hour. Whereas the KTT is not as frequent, running only every few hours or so. The major difference? It all lies in the degree of comfort. The KTT trains are newer and cleaner, have plusher coach cabins, with wide, comfortable seats – and they have upper decks, which is really cool. Just like travelling first class on a Boeing 777!

As you may have guessed, the KTT is very much in demand so it is best to purchase your tickets (you can pay in Chinese RMB or Hong Kong dollars at the station) at least a day before your trip. We have friends who have winged it, just showed up at the station for their intended journey only to find that the train was already full…and ended up having to wait for the next train. Imagine if you had an international flight out of Hong Kong? (Shudder…)

On the day of your trip, make sure that you come to the Guangzhou EAST Train Station. Bear in mind that Guangzhou has ANOTHER train station with trains departing for other parts of China, which everyone just calls the Guangzhou Train Station (of course).  The Guangzhou East Train Station only has trains for Shenzhen and Hong Kong. You will know you’re at the right place if you pass by places like Citic Plaza, the Westin and Ikea on the way there. Here’s what the station looks like:

Once there, you take 2 escalators up to clear security, including baggage x-ray checks, and immigration, before going into the departure hall to wait for your train. It is very easy to forget that you’re actually exiting China and going to another territory – so make sure, first, that you have a multiple-entry Chinese visa (otherwise, you won’t be allowed back in!) and, second, that  you’ve filled out your immigration cards and have enough time to clear immigration. On weekdays, immigration is a relative breeze but on weekends and public holidays, just like at the airport, the queue can be a nightmare, so be warned.

On our first KTT journey, which took place on a weekend, Herr Hubby and I COMPLETELY forgot about immigration, dawdling and wifi-ing at the Starbucks downstairs then wasting precious minutes filling out immigration cards. We were sweating buckets in the long queue afterwards, biting our fingernails while nervously watching the clock. We made it, with only a minute to spare. Never again! Because, believe me, China aviation may completely suck (99% of domestic flights – and even some international flights – are delayed) but China rail lives and dies by (an apparently Swiss or Japanese) clock. Down to the minute, trains in China are precisely, rigidly on time. 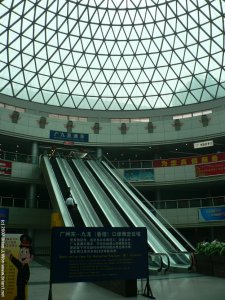 Once you’ve cleared all the doo-da, then you just sit pretty and wait. If you’re on a morning train and haven’t had your cafe latte yet, I hope you dropped by Starbucks (located near the station entrance downstairs) because you ain’t going to be getting any croissants in the waiting hall.

Once your train number is called, it’s time to go down to the train platform, board the train and look for your coach and seat number. 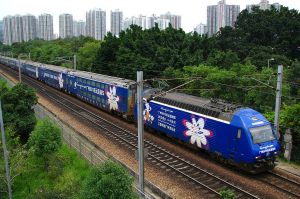 the mighty KTT train…all aboard!

Here’s a look at the two types of coach classes:
Premium class (also sometimes referred to as first class)

Isn’t it posh? Your bum will surely thank you after 2 hours! 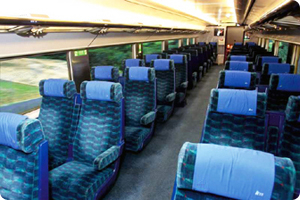 Ain’t too shabby either, isn’t it? So don’t despair if premium class tickets are sold out – as they sometimes do.

So here I was on yesterday’s KTT:

iPhones, iPads in premium class…this is definitely The New China!

I got busy on my iMac, jotting down notes for a job for a Beijing client…this is my new office!

have laptop, can work? yes, can!

As the train rolled on through the Guangdong countryside, our beautiful train attendant, hair and make-up impeccably in place, walked through the cabin, speaking alternately in Mandarin, Cantonese and English, distributing Hong Kong immigration cards, handing out free bottles of water and peanuts and hawking a food and drinks menu. I felt like I was on a Cathay Pacific flight! 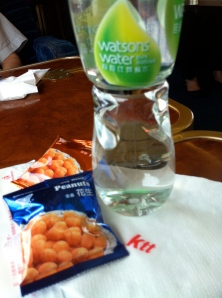 KTT SWAG (stuff we all get)

At the halfway mark, an hour into the journey, the train stopped for a few minutes at Dongguan, a city on the southernmost corner of Guangdong province. Then, before you know it, you’re rolling into Shenzhen and you’re at the China-Hong Kong border! 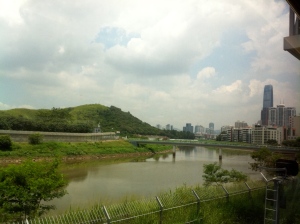 crossing the border…the little green hill & all the greenery is in Hong Kong, the high-rise buildings across the river are in Shenzhen

I had to send an urgent email to my Beijing client so I purchased a KTT wifi access card for RMB 25 (HKD 28, approx.USD 4) so I could quickly access email and get some work stuff done. You will see this wifi access sign on the KTT trains:

get wired up on the KTT

But a word of warning – wifi service on the train is spotty at best, so painfully slow on Chinese soil, and only really springs to life once you hit the border and you’re on Hong Kong territory: 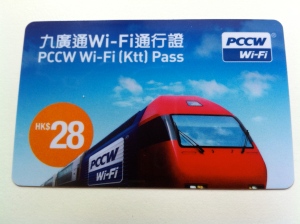 The last 30 minutes of the journey is already in Hong Kong territory as the train whizzes past (but does not stop at) Hong Kong MTR stations with familiar names, e.g. Fanling, Shatin, etc, and the landscape consists of quintessential Hong Kong scenery: high-rises dotted by people’s washing, concrete fly-overs, densely congested streets and scurrying pedestrians. As the train approaches its final stop at Hunghom station in Kowloon – get ready to do as the Hong Kongers do: gather your belongings (make sure passport and immigration card are on the ready) while the train is still running and make your way to queue at the exit door. Then, as the train rolls to a stop and the doors open – wake up your inner Usain Bolt and sprint to immigration!

If you’re savvy with Hong Kongers’ “chop chop” (hurry, hurry) attitude – and if you were lucky enough to have been on coaches 1 to 5 (these are the ones closest to the escalators in Hunghom), then you can clear immigration, exit the station and hop into a cross-harbour cab within 10 minutes. 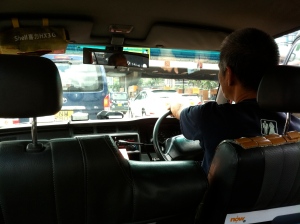 So to break it down real quickly: I took the 10:39am KTT, arrived in Hong Kong approximately 12:40 and was sitting down for lunch at the IFC shopping mall in Central by 1pm.