Happy Monday, Guangzhou! We’re a little bleary-eyed this morning after staying up last night to watch the Wimbledon gentlemen’s championship final between Roger Federer (#3) and Andy Murray (#4) live on TV.

Here in Asia, the match didn’t finish until nearly 2am and of course, we were so wired from all the excitement that it took us a while to calm down enough to actually go to bed and sleep. Such an intensely compelling nail-biter of a match, with a historically significant win for either player hanging in the balance…with all the action and drama that accompanies such a showdown.

Murray was all gangbusters in the first set, buoyed by a highly supportive and extremely vocal home crowd, while Federer was out of sorts, struggling to control a wayward forehand. That 40-minute rain delay early in the third set – which had us scurrying to Facebook at midnight while we waited for play to resume – ultimately benefited Federer who emerged to play again like his old self, the Federer we’ve come to know and love all these years. The cool, calm, collected champion playing masterful tennis seemingly effortlessly (while making his poor opponent run around the court, falling and stumbling, and desperately fight until the bitter end for every last point). In the end, it was Federer’s persistence and experience that prevailed.

It could have gone the other way so easily. Great Britain was already getting ready for a national celebration, with Murray poised to become a British athletic icon to surpass David Beckham. During a year when their queen is celebrating her Diamond Jubilee and just two weeks before the Olympic Games opens in London… what a party it could have been for Murray indeed. No wonder he broke down during the post-match interviews, poor guy – we couldn’t help but feel for him, especially when we saw his mother and his girlfriend were in tears too.

Today’s quote reminds me of something that Federer mentioned during his post-match interview. He talked about “challenges” and “changes” in his life during the past couple of years, hinting of his two-year Grand Slam title drought, but that, he “never stopped dreaming”. And that even though he is now married with a family of his own, he just “played even more tennis than before.” 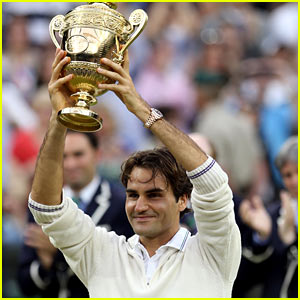 7-time Wimbledon champion and back to being world #1…to get there, Roger Federer just “played even more tennis than before”

You are what you repeatedly do, indeed. In Federer’s case, he has now claimed a historic 7th Wimbledon title and reclaimed the title of being the world’s #1 tennis player. Congratulations, Roger, well played!!!

today’s Aristotle quote with this great motivational “can-do” image is from one of our favourite websites, Sparkpeople! what an awesome way to start our week 🙂

Did you watch the Federer-Murray final in your corner of the world? Who were you rooting for? Were you happy or broken-hearted with the outcome???